This week I think I did so much over the weekend, that my body had enough, so I did a lot of resting. I also worked on finishing the quilting on my runner, which I did, but not in time to do the edging. I am doing a blanket stitch around the edge, then I think I will be finished.

We did get out over the weekend. We tried some places we had been before, but I wanted to get out and get photos and do some walking.

We went back to Savin lake to see if we could find some birds. Lots of birds, but they don't stay still, but I was able to get a few shots. I was surprised to see that I had gotten a variety of birds, once I enlarged them on the computer.

My big surprise was getting Eastern Bluebirds, the first time I have gotten photos of them. I also found a lot of nests hidden in the area, so a good place to come back to. 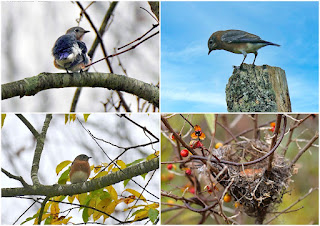 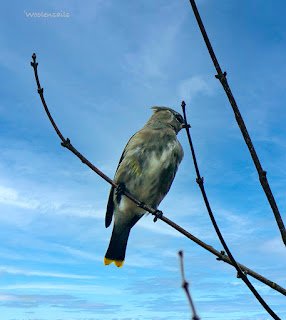 And there were Mockingbirds in the area. I saw several others and found a hidden place hidden between two small ponds, with lots of activity, so now I know where to go for bird photos. 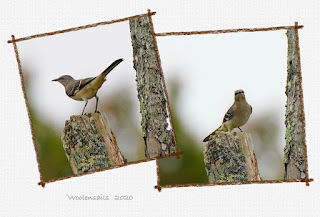 We enjoyed the foliage in the area and made a stop at a local cemetery so I could get a photo of a church I had seen before and wanted a close up for a future design idea. Then we stopped at Machimoodus and got a good hike in, although we took the wrong trail and did a few steep uphills to get back to the main trail. 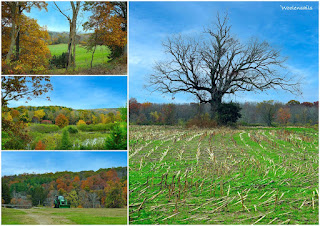 More of the views from our hike and a couple we met along the way. 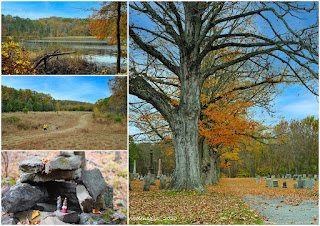 On Sunday we stopped back at Salmon River and walked along the covered bridge trail. It takes you up a hill with views of the river and the surrounding hills. The colors were coming out nicely in this area. 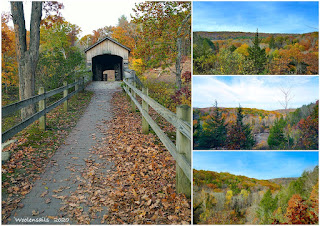 We took a new trail down a hill and found a spot along the river, wonderful place to relax and Bean loved playing in the water. 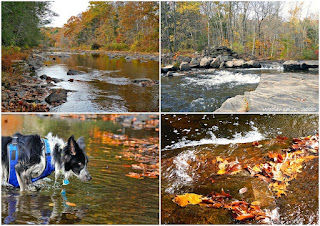 Afterwards we stopped by Machimoodus to check out the area by the boat launch. It was a beautiful area along the river with trails and grassy spots to park the RV, so a great spot to spend the day and bring the kayaks.

I hope you enjoyed traveling along with me. We had a bit of snow today, so I am not sure what tomorrow will bring. I know it will be cold, so maybe just an easy day to enjoy the sights and hopefully some new foliage. 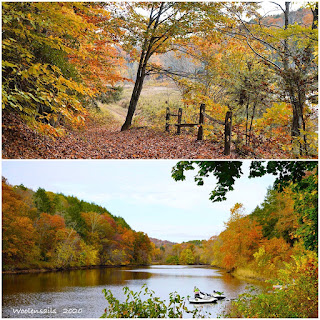 your pictures are amazing great bird pictures. we got a little snow but it was melted by afternoon
Cathy

You go on more fun adventures than anyone I know!

I love seeing covere bridges. You have become quite the photographer.

WOW!! Just WOW!!!! I would be out walking all the time if I could be walking through areas like that!! I sound like a broken record, but dang girl....your photos are just incredible!!! I love that huge old gnarly tree in the first collage....and that cemetery!!! What a beautiful place to rest eternally under those stately old trees....and that old fence!!! Gah!!!! We are back to bare and brown....a few remnant piles of snow here and there....and windy....oh so windy.....lots of power outages last night as well as today.... Made for a rough ride on the old broom last night LOL. ~Robin~

You are getting great bird pictures these days. It sure helps to find sites where they hang out. That is a lot of walking. I had lots of walking with my scouts this weekend and am ready for a rest. They are climbing Mt Takao next weekend but I think I will pass on that one, though it will be a nice season for a hike. It is getting a bit chilly and time to bring out warmer clothing and blankets.

Thank you for sharing your outing! Nowadays I only get out to grocery shop, not sight see. I miss that. Covid did that.