The weeks seem to fly by which is good in some ways, but I can never get enough done, even tonight I just finished the dishes and laundry and realized I hadn't done my blog post. Tonight I did make a nice dinner since Bill is home so that took time. The good thing is, on his 4 day shifts, I get him to help me with some cleaning.

I made a pillow with a design by Cheri Saffiote. I enjoyed making this one and I love the saying. 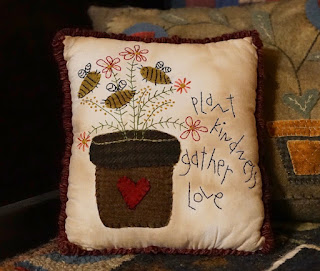 I also spend too much time trying to make masks. I am horrible with directions and the first one I made was a flat mask with darts for the nose and chin, but It was too close to my face and I couldn't breath. The second mask was in two pieces so it has a nice cone above the nose and fits snuggly around the shin and I can breath..

I used fabric I had won which was a nice weight and I had some white sheeting material, thin but dense so I can breathe and feel comfortable but no air can get through the fibers. I also used t-shirt material to make ties. Those are nicer since I can pull on them to tighten the mask around my face. The pattern I used can be found at  Wholefully.

I modified mine to make it easier, nothing fancy, just sewed it together with the pattern pieces and made one length of rope so I could hang it from my neck. 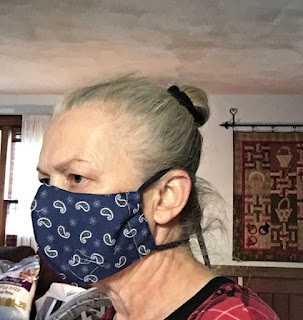 Then I made a batch for the kids, more for the boys and a couple for Mom and Dad to try. That way they can see if they like them before I make more. 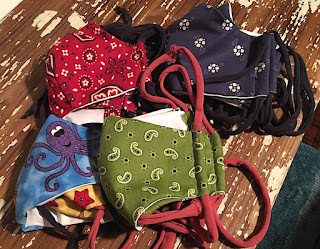 Yesterday was a fairly nice day, so we headed to the beach. I found out that my favorite place was open on weekdays only. There were a couple of wind surfers and a fisherman, so we had the beach to ourselves. It was so nice to get out in the fresh air and find some treasures. 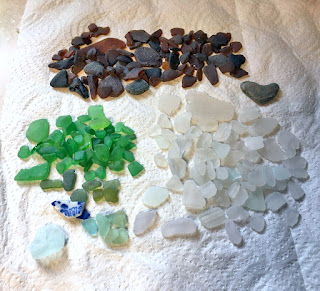 On the way out, we stopped at three different nesting areas. One osprey decided to take off after I got one shot, so I couldn't get closer, the second pair were in a farm field, so too far away to get a close up and the third was hiding in her nest and would peak up, every so often.

I hope you all had a good week and you and your familys are safe and healthy. 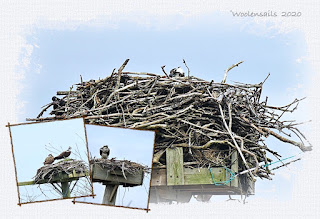 
I hope everyone had a nice Easter. It was not with family for most of us, but we can still treat ourselves. For me it was Clam chowder and Clam cakes. I made enough for an army, but we enjoyed the leftovers.

This is how mine came out. I follow recipes but change them up to fit my diet. I do not. use spices in my chowder, but I do use salt pork, you have to have that. I also use twice the amount of clams, I like a thick chowder and cakes full of clams. 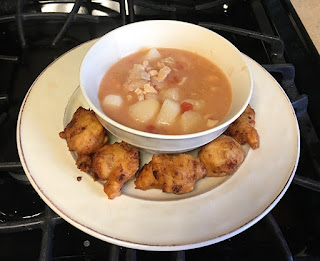 During the week I worked on finishing my challenge piece for the groups, Quilts by Cheri. We were given the dimensions and sizes for the background, then told to use baskets from her older patterns and make them into something new for ourselves. This is what I came up with and it fits perfectly on a side table I have in the guest room. 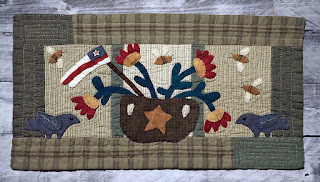 On Saturday we went for a short ride around town. It was nice to just get out and we spotted two osprey nests. One I will have to go back to, so I can get close ups, when they are in the nest. 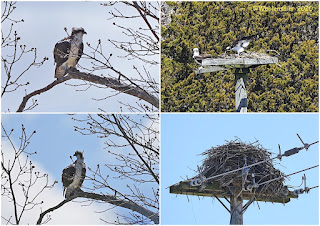 Sunday was another drive to the ocean. We took the side roads and spotted two more nests in the salt marshes. One was closer, but she was not happy that I walked through the bush to get closer. 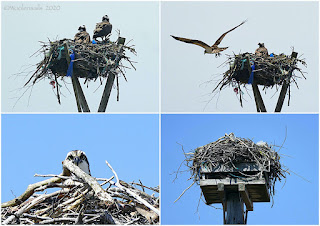 Today we took a drive, but Bean came and that made it hard to get out for walks, since all the places we found said, no dogs allowed. We did find a new boat launch, hidden behind some houses. It was really beautiful and quiet, but mostly marsh. 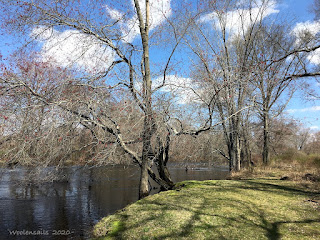 There was a bridge you could walk on, the problem, I didn't realized that where Bill is, is in Rhode Island, another step and you are in Connecticut, so I accidentally crossed the state line. And if that wasn't bad enough, I wanted to get a photo of a cardinal in the tree, on the other side. There was a big pile of mud at the end of the bridge, so I stepped on it to see if it was solid. Well, it was not solid and that was when I saw the actually color underneath, it was cow manure, lol. The farmer put it there to keep people from coming onto his land, and I was the idiot who stepped in it. 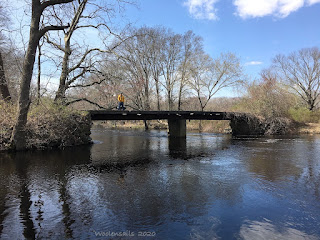 Further up river there was an abandoned mill, so we drove around and stayed on the RI side to get photos. I was surprised to see so many Double Crested Cormorants along the river, I guess they decided fishing in the river was easier than the ocean. These two are a funny looking pair. 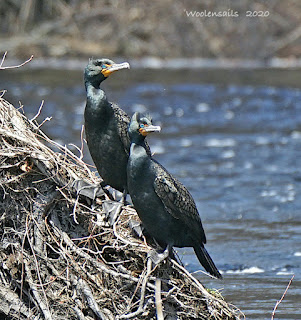 Our final destination was an old cemetery along the larger part of the river, but it was windy and cold and no dogs allowed. It is one of those places that you can walk in, for hours, so we will go back on a nice day without Bean. We were treated to another nest along the river, this one was built on a large crane, so I guess they won't be using that, for awhile.

I hope you all have a nice weekend. We are expecting some rain and cold so I am not sure if we can get out tomorrow, maybe a ride around the island to see what is open for walks and the views. Bill is on 4 day shifts now, so he goes back in on Sunday, then he gets four days off, just wish he got the nice days off. Be safe and find joy in the simple things in your area. 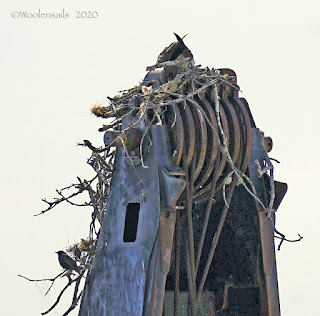 Posted by WoolenSails at 9:58 PM 7 comments:


I hope this posting finds you all doing well. I know for most of you, Easter will not be what you planned, we are eating alone, but I ordered fresh clams for tomorrow and plan on making chowder and clambakes. It is something we both love, so at least we can enjoy a special meal and hopefully some FaceTime with the kids.

I kept busy this week, finishing one project that I needed to make some fixes on. I used what I had and wished I had gone and gotten more light blues, I think the design would have stood out more. I also forgot on some places to raise the heights, so some are higher than. others. But, it came out ok and it was a fun project, even though it took longer than most.

The design is by Michelle Palmer and it was in an older issue of Punch Needle and Primitive Stitcher. I like that you can order online issues, and they do have a lot of nice patterns. By ordering a past year,  you save money. 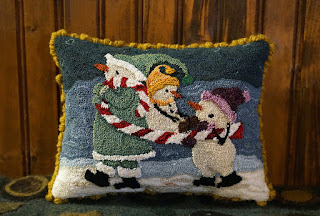 Another project I finished is a free stitchery by Theodore Cleave. This one I left as is, I wanted it to be bright and happy. I also added the word hope, we all need that. 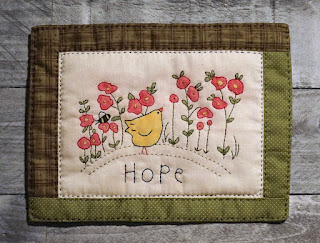 It is getting harder to find places to hike. Last weekend we went to a cemetery, which was nice and quiet and we found some interesting buildings, as well. Then people started coming in and we left. 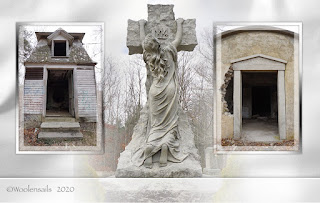 Then we went back to the Boy Scout area, it was crowded and the roads and trail heads were packed with cars, so we kept going. Down a side road we found another hiking trail to a pond and no people, so we got to enjoy a walk by ourselves. 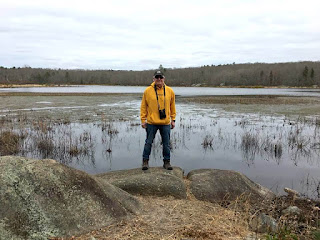 And on the way home, we went down another back road and found this wonderful fishing area, which is also where you can rent kayaks and paddle up river, we are definitely coming back. 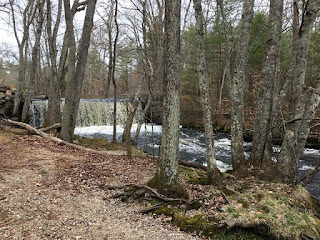 And we did something at home, I got a new barn wood wall in the guest room. The wall was horrid and this way I can hang quilts and my paintings. I set up my desk from my beach room and will work on a new painting next week. Bill is going on 4 day shifts so they can keep the shifts apart, so that means he will be home more and I will have a place I can hide away in.

May you all be blessed with good health, as well as your families. 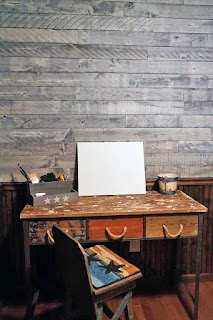 
I hope this post, finds everyone in good health and in good spirits. I do miss getting out more and shopping, I am fortunate enough to have lots of supplies to keep me busy for months. Our state has closed all state parks and camps, so I am not sure if we will be able to camp off season, which is my favorite. Our trailer is also stuck at the factory, they shut down the day it was due off the line, so even when they can open, it will still take time to ship it here. I wasn't going to use our old one, but I may if we can camp locally.

I do not understand the closure of state beaches and parks, they are the biggest areas to keep your distance and now people will be congregating at the town beaches and smaller parks, which is more dangerous. Luckily I know how to avoid people and hidden areas, so hopefully we can get out this weekend.

I was able to finish a few stitcheries this week. The first is one that is offered for free, by Theodore Cleave. It was perfect for Easter and since it is larger, I made it into a mini wall hanging. It is about 9" x 11". 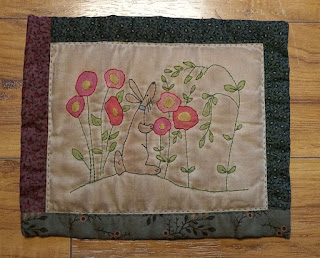 I also received the monthly stitchery from Kathy Schmitz, another fun Easter piece. This time I reduced the design and made two, lavender pillows. They were fun to do and I like how they came out. 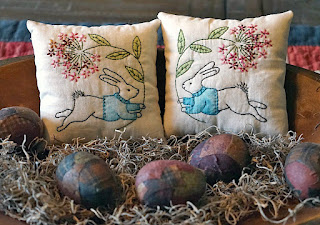 We did find a place with no people last weekend. We went to the Boy Scout camp, which is closed for the season. The camp is on a beautiful lake, with lots of roads and trails. We found a new area with camps and a pathway and enjoyed being outside without worry.

This part of the camp is older and had some leftovers from the 30's and equipment for clearing out the newer areas. 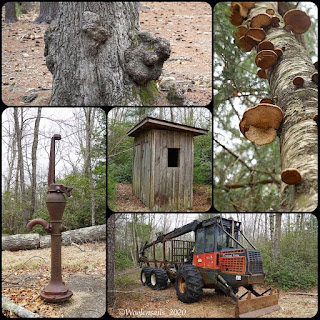 We ended our walk at the main camp. There were a few more people that had come in, so we avoided them and waited for a couple to leave the little beach, so Bean could have some play time. It was nice to get out and nice to get some fresh air exercise. I hope all of you are finding ways to get out and stay safe.

I wanted a nice photo of the guys and Bean was acting up, and of course, the minute he poses, Bill acts up, lol. 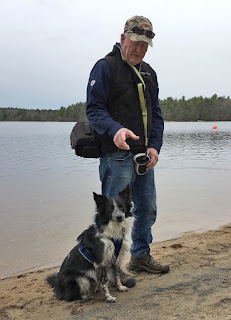