This weekend we went for a few drives and found out, one store was closed on Monday, but the good thing was, Colchester Mills was open and I was able to get some nice muslin and a new pattern, as a treat.

This design is by Blueberry Backroads, called Just for You! I love the fact that it is small and has the perfect saying for gift giving. I made the first one into a pillow, but they also have a flat version. I think the flat one would be fun to fill with balsam but I didn't get any this year. It is also nice since the flat version can fit in a small yellow envelope, along with a card.

I gave it a little color and some bells. 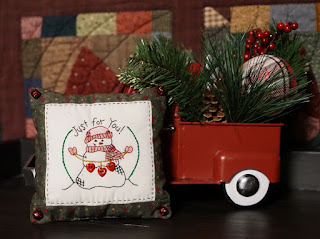 My freebie for the week was a design I found online, a simple tree with cut out hearts, but I decided to try some of my buttons. It was simple and quick to make up, so a great giveaway item, and something simple enough for kids to do. I think I like the smile face trees, better. 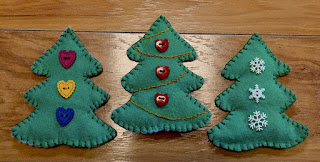 I saved the site these came from, but it seems to be an iffy site, isn't taking me to the same post, so I am including the pattern I downloaded and it does have the name of the site it came from. I wouldn't bother though, I already cleaned out my cache to be safe.

I hope you all have a wonderful weekend. It is going to be cold again, so we won't be hitting the beach, anytime soon. 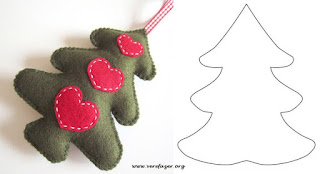 Posted by WoolenSails at 8:09 PM

you are always so productive and creative. I love those little trees very sweet
Cathy

The trees with the hearts are cute Debbie - I like them!

I didn't see any with smiles, but I like the ones I did see. Thanks for the cute little pattern. I like the idea of making some with shaped buttons.

Thanks for the tree pattern. I may try dropping some essential oils that smell like spruce or Christmas on mine.

I have to teach a simple craft in February, so I am taking notes.