We had a beautiful weekend for getting out, so we took advantage of the weather and the lower tide. We spent a few hours at the beach on Saturday and of course I was happy I found more glass this time. There were other collectors who had gotten there earlier, but they tend to look for glass that is at the shore, I went for the rock piles and found a lot, hidden under the pebble beds.

And while we were there, we spotted about 100 sailboats coming toward us. I found out that it is an annual charity event, that was started after 911. They do it every year and the money goes to local charities, one is for sailing lessons, for wounded warriors and a kid's sailing program. 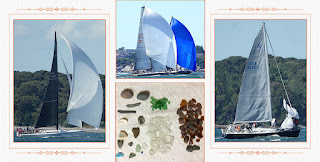 On Sunday, I was still feeling sick, but the boys wanted to go out, how could I say no. The plan was to take them to the park for a short walk and some time at the playground. But, Bill went by the exit and we ended up at the beach. I am glad he messed up, the weather was so warm, I wished I had put on my suit. But, we still got wet with the crashing waves. Nick enjoyed playing in the sand an all Alex wanted to do was stand in the water and have the waves hit him, I loved seeing him playing and laughing so much. 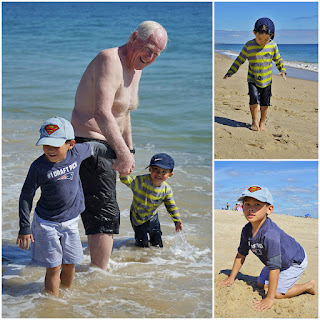 We finished the day with a trip back to the playground and then we took them to the farm for some ice cream. They have a play area for the kids with a giant sand pile for them to play on. They also had great displays outside and in a barn, for picture taking. Of course no one could sit still long enough for a nice porttrait photo.

I hope you all have a wonderful weekend. I seem to have over done it, so I crashed today. Some housework got done and lots of sewing on my quilt. 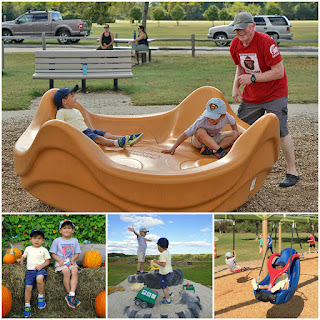 Making so many memories. Priceless ❤️

Looks like Grandpa and the boys are having fun. How wonderful that it was a warm day with warm water.

Such wonderful memories for your grandsons. Hop u are feeling better I came down with a cold. Lakes k of sleep and stress did me in
Cathy

You sure do make the best of time with those boys. I think back to the Sunday afternoons I spent with my grandparents and the influence it had in my life.