Well, the month is over and the last weekend, which is the one we looked forward to, was a washout, so we came home early. For me, camping is being outdoors and if I am stuck inside for 3 days, I would go nuts, lol.

We did get to spend one day before we left, so at least I got in one more paddle and time enjoying the wildlife. It is amazing how many birds and animals live along the waterways.

I was able to find a new nest and  get a shot before I disturbed her enough, to leave the nest. I would think the blackbirds would be used to all the boaters who paddle and fish on the pond. 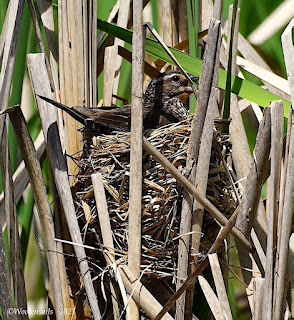 And here is another Redwing Blackbird couple, she was not going to take that worm to her babies until I left the area. The male just makes a lot of noise and hopes I will go away. 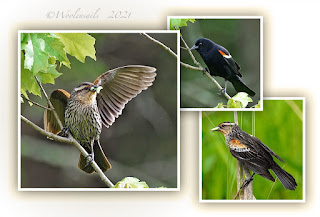 Since the weather was on and off that day, we took a ride to the observation deck and spotted this Hummingbird high in the tree. There were a lot of birds, but they move too fast and hide in the bush, so that is a hard area to get shots. 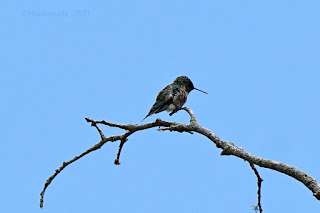 And I tried to get some shots of the birds near the waterfall, but the rain was blowing into my window, so I couldn't get a clear shot. I decided to make a montage with a saying, for them. 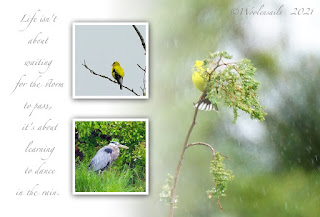 And since we came home early, we had a little party for the family, Ivy, the boys and Bill, all have birthdays this week. Nick got his new bike, which was too big for him, and since they couldn't take it home, we offered to drop it off the next day. In the meantime, I had Bill take it back and get one a few inches smaller. I rather have him ride a bike that makes him happy than one that he is afraid to ride. Once he got used to it, he was riding like a pro and smiling, that was all I needed to make my day. Alex loves space and wants to be an astronaut, so we got him a play mobile spaceship, play set. 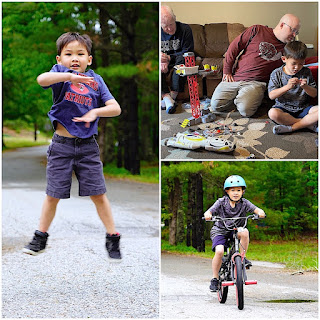 I spotted a robin, bring dinner, only one baby in her nest. 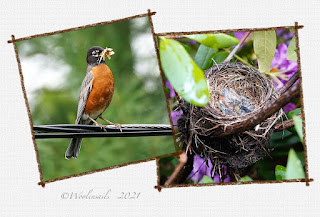 On the side of the yard, another nest, this one a Catbird. She had two smaller babies in her nest. 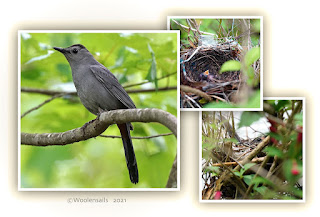 I also caught a Blue Jay, who was kind enough to pose for me. 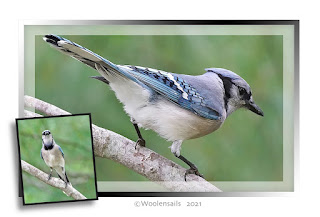 And a few of the other visitors to his yard. A Downy Woodpecker, a Carolina wren, one of the neighbors chickens came to visit, a Chipmunk and lots of bees. It definitely was a lot easier than taking photos from a moving boat.

I hope you all had a wonderful week and a weekend filled with joy. 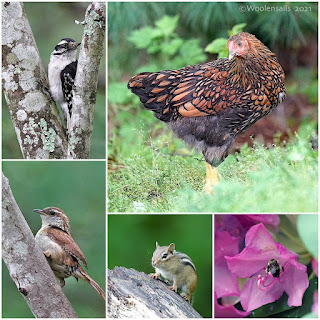 You got some incredible shots! I think the chicken's feather pattern is astounding. I have never seen one like it. And who doesn't love a chipmunk! Very wise of you to get a smaller bike that he can enjoy greatly now. I remember having to "grow into" shoes, clothes, bikes, and more...it wasn't satisfying! Sorry you almost literally got "washed out" of your camping the last weekend.

Happy Birthday to all! Yes you do get some amazing shots the humming bird on the nest blew me away when you had that on.
cathy

Yes, like Holly said...some incredible photos (as always!!). I have always thought your photos amazing, but I have a new respect after having trying to get a photo of a bird that has being singing such an unusual song in our yard lately. Well, I could not only not get a photo of it, but I couldn't even FIND it. It sounded like it was directly above me and I would look up, and then I would hear it to my right LOL. I never even got a glimpse of it. I do think, though, that you have an unfair advantage....you most surely are a bird whisperer. I love that chicken's feather pattern and colors too! Happy belated birthdays to all the birthday peeps! ~Robin~

Happy birthday to one and all :-)

Beautiful photography, but the pale blue words on the side ended up unreadable.