Vacations do not last long and it seems, all my plans fall through and we end up doing something else. Today it was nice out but when we got to the beach, it was cool, so we walked a little and headed home. This weekend will be hotter, so hopefully some swimming with the boys.

Yesterday we headed back to Newport to visit some a few places for hiking and birding. The first stop was at Miantonomi Park. I found the back area with pathways and lots of birds in the area, but they were either hiding or flew off.

There is a tower at the top of the hill, and it is a nice walk. It would be nice if the tower were open, I can imagine how great the views would be. The tower is a World War1 Memorial.

The third photo is a beach we stopped at. I had heard it was a good glass beach. It is called pebble beach and I could see why, nothing but rocks and pebbles, no glass and the tide was high. Beautiful views though. 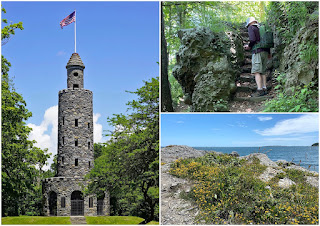 Our main stop was at Sachuest Point Wildlife Refuge. It has paths that run along the point and some that go into the bush, for bird watching. This is the path leading to the point. 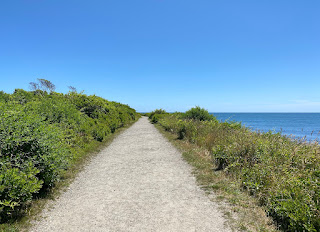 A few views along the way, as well as a few beach heads, that we stopped to explore. With high tide, no glass was found. 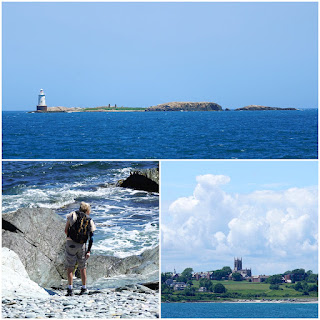 And we saw a lot of birds and a few I had not seen before. Did I get any photos of them, of course not, they hid or flew away, not my day for bird photos. But I did get a couple who stayed still long enough for me to focus and a few baby bunnies were along the paths. 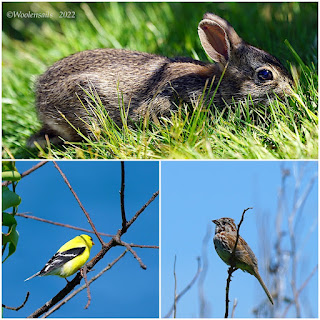 I haven't had any time to stitch at night, so I will catch up on projects next week. I did get to see the new baby Red-Bellied Woodpecker. It was flapping it's wings like crazy and squawking for food, but Dad didn't seem to pay attention and just filled himself.

I hope you all have a good weekend. 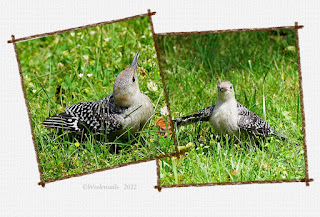 Sometimes changes of plans lead to the best adventures. That tower looks amazing. I would have loved going to the top too. Love the bunny picture! Happy Weekend! ~Robin~

You have so many wonderful places to visit!!! I am kind of envious ;-)

I too am envious of the beaches you so easily visit, the wildlife you see, the fresh cooling breezes you feel. Guess I'll enjoy your time there vicariously. Tha is for sharing.