This week I worked on a table runner. I am trying to use things that have been lying around and finishing other projects and this was a perfect project to use blocks and have something for my side table.

The blocks were gifted to me by a friend but a bit large for the table size, so I cut them in half and then arranged them into a windmill pattern. I usually go with smaller blocks but I also wanted to get it done so I could use it, so they are still a bit larger than I like, but it looks nice on the table.

I machine stitched the blocks and hand stitched it afterwards. I got the penny idea, because the blocks had been sew and recut, so they centers were a bit stiff and bumpy. The pennies cover that area and I was able to stitch around the bumps, instead of going through them. I did the quilting with just the batting and added a wool felt backing, afterwards.

I tried photos of it, in different areas, but it seems the light in my house is horrid and with larger pieces, it is hard to place it so I can get better lighting. I put it in this area so I could shoot at a better angle, so it is a bit smooshed at the ends, to fit the area. 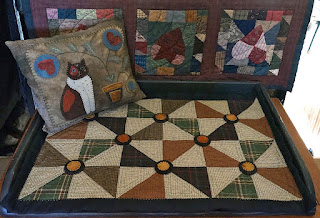 Last weekend the weather wasn't the greatest, but we got out and enjoyed some exploring. On Saturday we drove up state and visited a few ponds, but no eagles. We enjoyed seeing some new areas and getting out for a bit, after the rain. 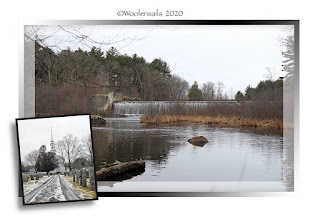 On Sunday, we visited Connecticut and started in a new area and came down river. No eagles and the roads on the map were not back roads, but dead ends, so we lost a lot of time, turning around and starting over. We did find a few new graveyards and I got glimpses of the sunset, as we headed home. 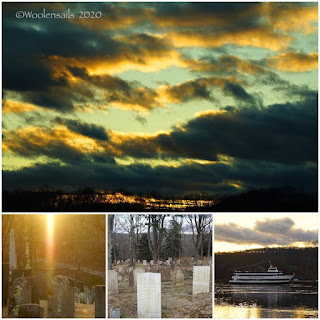 It is funny how we look all over for eagles and as we are driving down the road, there is a red tail hawk, sitting on a telephone wire. He was not happy that we stopped in front of him and flew off into the bush, but I was able to find him in the bush and get a shot before he took off again.

Tomorrow we get a new tv, the beauty of having a protection plan, they are well worth it. Sunday will be our day to get out, and I found some new graveyards along the river, so we can look for eagles and see some unique stones. I hope you all have a wonderful weekend. 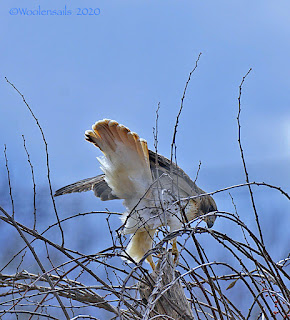 Posted by WoolenSails at 8:46 PM

Love your photos and your table topper. The pennies were a really good idea.

Theblocks made a nice piece for your table. The cat pillow is oh so cute. I don't remember seeing it before.

The table topper looks great....
So many lovely places to travel around to...
Hugz

Love your table topper. Terrific shot of the hawk. .

That sunset is amazing! Love reading about your adventures.
Cathy