It seems I have more energy to make things at Christmas, even though it is too late to make gifts, some I can hand out to people and others I can save for next year. I actually have a stitchery and punch needle, waiting to be started, so hopefully I can make at least one for next week.

This week I was in the mood to needle felt. The plan was to make a simple gnome santa, one for each of the boys, but I got carried away. He got bigger and then I went off on my own, as usual, so he is simple but more detail than the original which was just a blog with a beard, lol.

I was trying to make his cuff at the bottom, look like it draped over his boots, but didn't come out the way I planned. Some day I want to make a nicer old world santa. 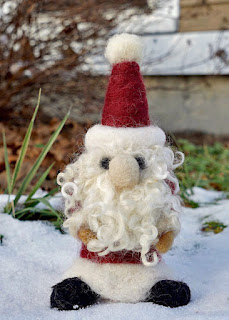 I also made up some ornaments from a design by, Downeast Thunder Farm. She has a lot of nice felt designs that she offers for free and these were perfect for Christmas giveaways. I didn't have any white felt, so I used wool, which isn't as stiff, so I put a piece of felt for the back. 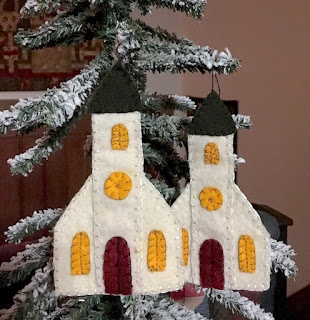 Another ornie I made was these fun stockings. I saw them on  pinterest and I saw that they are being sold from an import company, so I took the liberty to make my own version. I just traced out some mini stockings and added things by hand cutting, so no pattern. Simple enough to copy to make your own and put your own touches to. Mine are about 3" long. I may try some with carrot buttons, I do have a lot of chenille that was gifted to me. 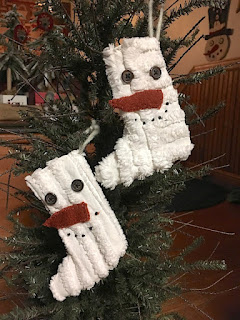 I hope you all have a wonderful weekend. I still need to come up with a good idea for the boys. I have bought them some things, but Nick wanted an electric guitar. I don't know if he will take it seriously, so I want to get him something with strings, but also fun buttons and I can get Alex a button one, but so far, they all have bad reviews. Not sure if it is worth it, so will see what the stores have, at least I can take it back if I have to.

It is also a time of remembering, not a day goes by that I don't think of my daughter and Christmas was always her favorite holiday. This guy is a frequent visitor when I sit on the porch. 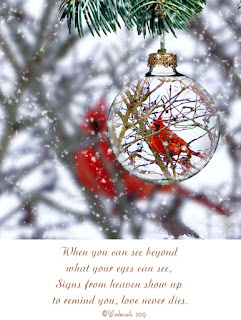 Posted by WoolenSails at 8:15 PM

Your little Santa is adorable! :0)

Beautiful makes, Debbie. The snowman stockings are my fave. Hugs to you.

such wonderful pieces. Christmas is such a hard time to be missing someone so close to your heart.
Cathy

I like seeing all your Christmas crafts. As I was talking on facetime with one of my daughters, her hands were busy making little reindeer felt hangings to hold candy canes on a tree. I think they were for a sale at her school. I do like that santa-elf's curly beard.

Maybe I've mentioned it before, but everything you make is just adorable! Also, I love the verse with the cardinal. 🎄

So creative ~ and productive!

such gorgeous Christmas things you have made.... so much detail in your Santa.... Christmas can be hard in so many ways..... much love to you..
Hugz

Love them all...you certainly are in the mood....I need some of your energy and inspiration