This week I have been getting ready for camping, but I wanted to make something that I could finish in a few days. I admit, I had to push it, to finish it fast enough, but I got it done.

The design is a freebie offered by Lori Brechlin in the punch needle facebook groups. Lori's group is called The Punch Needle Guild, if you are interested in joining her group, but it is offered on the others.

I used floss from my scrap box, lots to use up, that is nesting more and more. The orange is a variegated floss that I bought in a package. It is cheaper and with a coupon, you get a lot more for your money. I over dyed it to antique it a bit and it makes a fun pumpkin shade.

I used the twisted yarn method for the edge, a mix of black wool and a bumpy green. Once done, I antiqued it with walnut ink. It looks lighter and whiter than the actual piece, but I have to lighten some areas so you can see them, which ruins the rest. 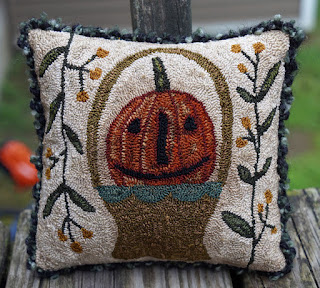 We also attended the memorial service for my daughter's friend. They were very open about her death and that she lost her battle with her addiction. There was a lot of sadness and crying and a lot of laughter. I made up a little photo of Jenna and my daughter Danielle, as a tribute to them both. And it was confirmed that Jenna will be buried near my daughter, just a few feet away, so I think that is a comforting thought for both of our families, together again in death.

This is when the girls were little, at Jenna's house. I had never seen this photo, so was happy to see them together, smiling and happier times. The saying  I found online and changed to fit them both. 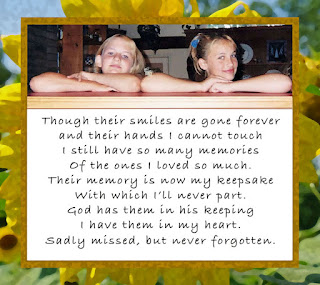 Posted by WoolenSails at 9:36 PM

Am hoping my next detour from rug hooking might be a needle punch. I've the needles, the fabric and plenty of floss.

Very nice tribute to both girls and such a shame and waste for their demise. Sorry for your loss.

The words didn't quite come out as I'd intended. Such a waste of young lives with so much to look forward to. This addiction problem is an epidemic. I just had dental surgery with stitches in the gum and was given a prescription for hydrocodone. Had the prescription filled "just in case" but endured the pain without any pills. Again sorry for the loss of their lives and others like them....sad.

I just love your finish!! I am sorry for your loss. It is hard to get any narcotics for pain here, even for our cancer patients, because of the troubles. It is just a terrible thing. I am so sorry.

I love your piece as always. So of very sorry for the loss of your daughter friend so many memories
Cathy

lovely punchneedle piece... so effective ….. A sad service for everyone, as you say a lovely thought that they are buried nearby.... must have been hard for you.
Hugz

Losing a child will always be hard, no matter the cause. Your tribute to the two friends must have been some comfort.
My daughter and I have a favorite local restaurant named "Pumpkin". The Organic food is so good and the people are super friendly and accomodating. I have been thinking of making a small quilted banner with some kind of a pumpkin design on it. I am inspired looking at your stitchery.

The drug epidemic is so heartbreaking. So sorry for the loss of Danielle's friend. As a mom, I cannot imagine the pain.
Hugs,
Lauren