This has been a whirlwind week, going all day and coming home to clean and cook, then back at it, the next day. Today we stayed home and I caught up with some real cleaning and resting. We did look at trailers and picked one out, but it didn't work out. I loved the size, but realized it lacked the storage I wanted. We were all set but Bill's security for credit access, shut them out, so we said it would take too long and we would rather wait. I have decided to look for a small truck camper for weekend getaways and wait until we find the right size and type of trailer, that we want.

We had a great week for getting out, a bit hot but always cooler by the beach. We made beach stops are several places, but the tides were usually high. We did find a bit of glass and some driftwood. 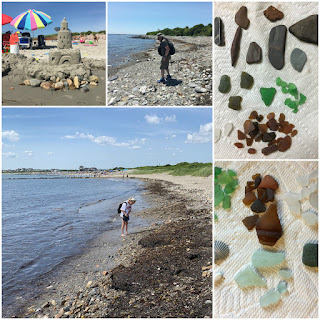 We spent one day in Newport, the tower was impressive, but closed, so we couldn't go to the top. We also did a 4 mile hike around the trails at the bird sanctuary and then we stopped to get photos of the Castle lighthouse. As usual, we had bad timing, there was a wedding going on and they were about to get photos at the lighthouse, so I took a quick shot from the path. 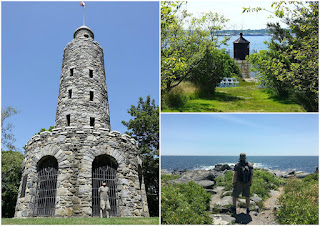 The next day was spent with the boys at the state boat launch in Burlingame. The launch has a large cove with shallow water, so it was perfect for the boys. I was so happy to see Alex get over his fears. He did not want to go in and being in deep water was ok if I held him. But after a while, he was going up to his chest without a life jacket and going out in the boat with me. Nick was showing me how he could swim and even paddled by himself. 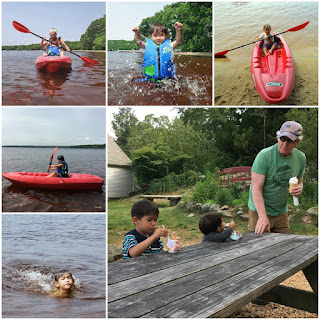 Thursday we wanted to go back to the pond, but they closed due to high bacteria. Found out later that it was only certain areas, but better to be safe with the boys. We took them on a picnic near a waterfall and then went to another boat launch beach, lots of shallow waters. It was so crowded we couldn't park, but I got out with Nick for a quick look and someone left, so Bill parked the truck and we were able to enjoy a few hours at the shore. The kids loved playing in the water and seeing the little crabs, running around in the shells. We even go to see two large horseshoe crabs. 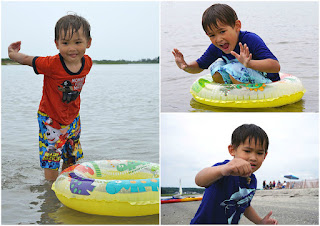 I got a few shots of birds at the sanctuary and spotted a Great Egret at the boat launch. Wonderful to see such a variety this week. 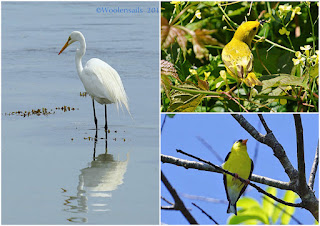 Today I got caught up. I also had to empty the trailer and clean it, and now it has to be repacked. But it is good, it needed a good cleaning and a lot of things will be left out so I have more storage space. We even found a good spot at the ocean in two weeks, so a three day weekend will be nice.

This week our Robin's eggs hatched. Her fist eggs never hatched, so I was happy to see that two survived. Even though I am exhausted, it was a week filled with beauty and happy memories with the boys. I hope you all had a wonderful week and a fun filled weekend. 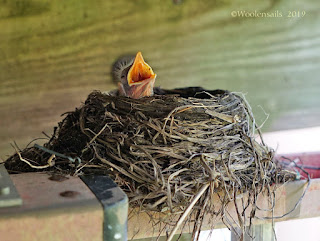 Posted by WoolenSails at 7:26 PM

a busy week with lots of fun. the trailer is an investment so a good idea to wait till you get exactly what you want. great fun with the boys... you are so lucky to see so much of them
Hugz

Those boys sure are growing fast. It's nice you can find so many places to enjoy time together. Good reminder that my van could use a clean up session too.

you had such a busy happy week. the look on the boys faces says it all. they are so happy to be with you and enjoy the water.
Enjoy the weekend much better weather here not so humid.
Cathy

Making memories. Nick and Alex are lucky boys to have such wonderful grandparents!

I love seeing all your adventures...what fun grandparents you and Bill are! Love seeing the boys...hugs

I need beach time so bad I can taste it - your pics always give me a lift, Debbie! You and Bill are awesome grandparents. BTW, I LOVE your whales!!!!!!