This has been quite a week. We had the solar put in, so they were here on 4 different days to install equipment and today the panels went up, so it is finally done. When I had a few quiet days, I worked on a project and watched tv, it was nice to make something new and not hear banging all day.

This design is by Julie Porter and offered on Facebook as part of a free chicken series.  You can find the group page at Primitive Quilts .....

It is a stitchery and I decided to do the large chicken in applique. I also made the mistake of trying to add red marker to enhance the red and forgot it was still wet, so I messed up the comb on the large chicken. Luckily I was able to take out the original stitching and enlarge the comb to cover my mistake. 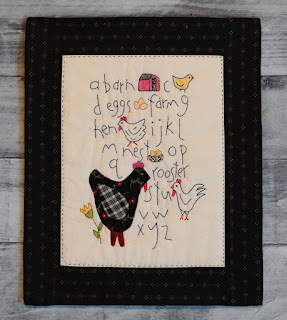 Last weekend we had the boys for the day and since I didn't have the pool set up, we got a better slip and slide with sprinklers, for them. They had a ball and I enjoyed watching them play. I also had them tonight, while my son took Ivy and Bill out for dinner, for their birthday. This weekend I will have a party for the boys to give them their gifts, lots of birthdays in one weekend. 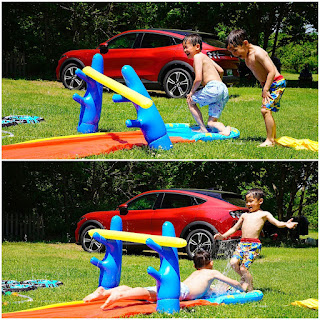 Lots of activity this week, more babies are coming out and one hummingbird is coming to the feeder. She is the only one for now, and I hope I get to see more later on. 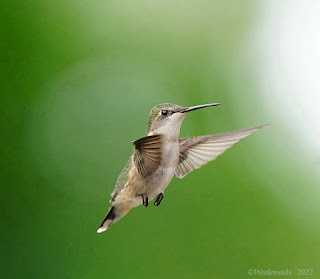 And ones I rather not see, they tend to demolish the food, a Common Grackle. 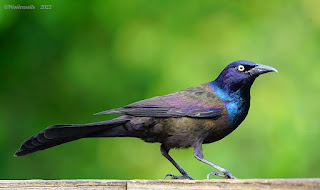 And today the yard was full of birds, the majority of them were crows and a lot of Starlings. The young were hungry and wanted to be fed. It got to the point where I had to chase more away, they were eating all the suet and attacking the regulars who come to visit.

I hope everyone had a good week and enjoy the long weekend. 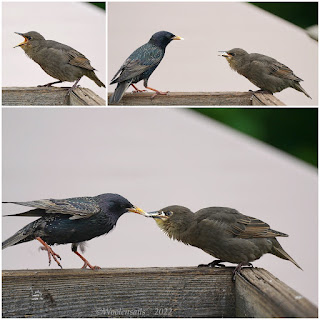 I love your chicken stitching! Very cute. It looks like the boys had a blast. :-)

Once again, a busy and productive week for you. Not warm enough for "pooling" here yet....and when it gets close, it rains. Yikes. Our "summer" is slipping away and I still have the heat on and sweats. Wishing you a wonderful holiday weekend.... ~Robin~

The chook Stitchery is lovely I haven't seen that one ...... Great pics of the birds