This has been a slow week but I picked up speed at the end and have several new projects in the works. I finally made it to another Doctor and explained to him that I am not sick with a cold, but my allergies were so bad, I could hardly breath and I was always coughing.

So, he gave me a liquid med and I put it in my mouth before I realized it was cherry flavored and sweetened, so it worked but then it triggered off my other allergy symptoms. So, he gave me my regular medicine and I am finally balancing out, so hopefully I can get back my energy and not get sick again.

I did make up some more lavender sachets, I am making them for drawers and cupboards that store items. It keeps the musty smells away and so far, the bugs. The designs are from different sources, from patterns I had in my stash. The middle house design is a freebie from Lori Brechlin.

I also used a free pattern from Rebekah Smith. She has several on her website and is offering a small each month, at a lower cost. This one was made into a jar lid, but I decided to do the basket on it's own. Perfect to hang on my seasonal tree. The stitching is more tan, but the camera made it pop. 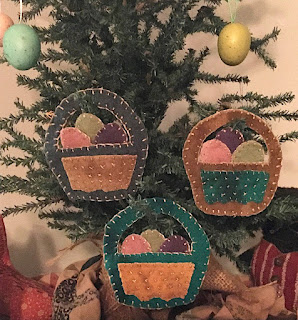 Last weekend we went out for our usual ride and I did see the eagle, as he flew by, high in the sky, so no photos. We did try a few bike path areas, to see what they were like. They run along the river and some ponds. I am hoping I can get out on my bike this year and try all the paths we have found. 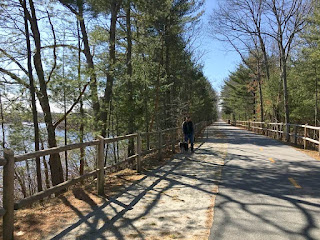 On Monday I went to the doc and Bill took the day off, so we were able to get to the beach. We missed the full low tide, but I was able to find some treasures before it came in. 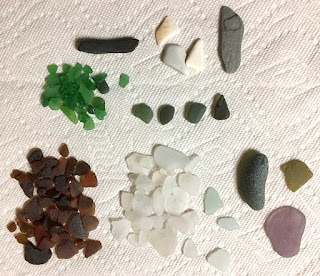 And with good weather, we are able to get out more, which makes Bean very happy, since he gets to come along. He loves the beach and there was so much seaweed on the beach that he was getting buried in it.

I hope everyone is doing well and being safe. I avoid stores for now and haven't been able to see the boys. Last weekend was my son's birthday but they were sick again, so we got to video chat and he sent me a video of the boys singing Happy Birthday. 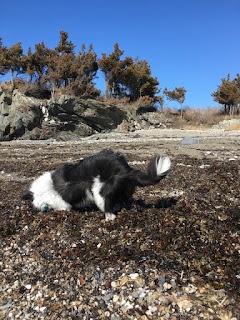 I always love your little pillows. It must be nice to have them stored with items like clothing, but a shame to hide the lovely artwork.
Bean must be very patient waiting for his day on the run. I love those border collies but wonder if I could give one the exercise it needs.

I too love your stitching so sweet and useful.
I am sorry you haven't seen your grands I am sure they miss you. We are sticking very close to home out for walks and I ordered groceries for pick up tomorrow. My daughter is going to start teaching from home next week not sure what my grand daughter's school is doing yet.
Glad you are getting the medicine that you need.
Cathy

I'm hoping the meds will kick in and you will feel better.
Lovely stitcheries as always. I will have to look for that Rebekah freebie.
So much has been cancelled here. People just need to use common sense...like not hoarding toilet paper. I just don't get that...lol!

Love your finishes! I have allergies too, so rather than keep explaining to people 'it is the pine trees!' I am staying home. Sew time! ;)

Lovely finishes, Debbie. So nice to see a pic of Bean. Take care.

Glad to read that you're on some kind of a rebound. Allergies can really stink. Love your little sachets...and the basket ornaments!! And, as always, I love your beach glass treasures. We came up to the lake for the weekend and I was so happy to see that our eagles are back...that means we will again have baby eagles in the nest right outside our door. Yes, crazy times out there...so discouraging to see the response of some people. Luckily, we live in a rural area in a state with few (6??) confirmed cases of the virus... I know I should probably be more concerned with my compromised immune system, but I have always washed my hands (probably too often), cleaned and sanitized, and, ummm, used toilet paper LOL. Smiles & (virtual only, of course) Hugs ~ Robin

I'm glad you got your proper medicine! Your little pillows are really adorable. I have a birthday coming up and am thinking of canceling - not that I can stop it, lol, but I can stop the planned get-together. We'll just wait it out. Stay well hon!

Those basket of egg ornaments was a good idea. If I remember correctly, you keep a tree out for decorating year round.