The rain finally stopped and we were able to get out Sunday and go for a nice walk. We were heading to the lighthouse but I decided to go to Fort Getty which was an old fort in World War II and now it is a park and camping area.

Usually we just go in and drive around and enjoy the views but this time we parked at the entrance and found a wonderful path that went along the cliffs on one side and a bird sanctuary on the other. We went down to the beach area first and I found this little hidden entrance to the other side. 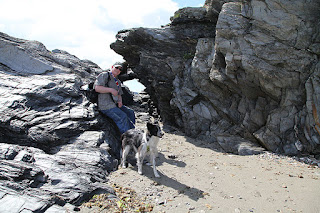 On the other side was another small beach, surrounded by the cliffs and a nice place to enjoy the views and let Bean play. There was a huge dark cloud coming our way and the sun was beaming through, one of those moments that seems awe inspiring. 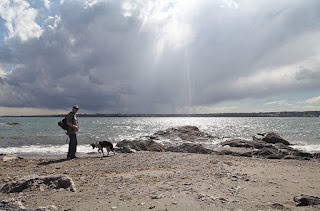 We headed back up and walked along the cliffs, but it got a bit narrow and I have no desire to fall down a cliff, so we found a path that took us above the cliffs. 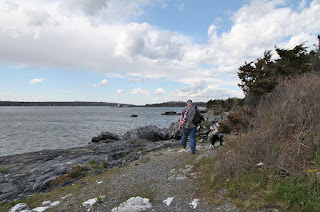 The walk goes around to the campground and docks. You can launch boats here, a future paddle for us someday. The lighthouse is on Dutch Island. It is a park now and you can paddle over and camp there, but when we were young, we had a boat and would spend the day on the island and have a picnic on the beach. 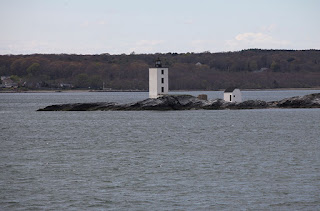 We were able to walk along the beaches on the other side and Bean played with some labs who were going for a swim. On the opposite side is the bird sanctuary, I spied this guy feasting on a clam. 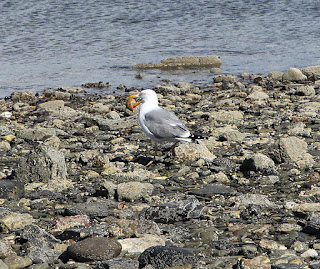 Coming back we went back up the hill through the campground, which is closed now. At the top of the hill are where the forts once stood, now you can see remnants of what is left and most have been caved in and covered to keep people from getting hurt in them. This is the entrance to once bunker, a bit too creepy and dirty for me to go inside. 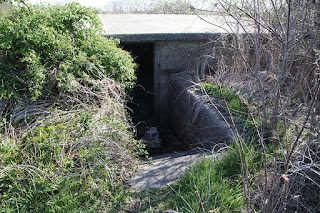 The men would keep watch in here through the slits on the other side. In those days they were afraid the enemy would come up the bay and attack.  During the war, the island was flat so there were no trees in the way. 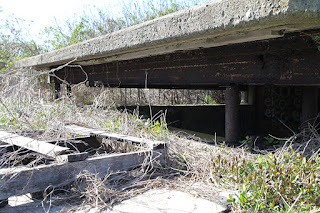 And my special gift for mother's day was a heart rock. Bill was searching all over the rocks for a heart rock and I said, don't look, the right rock will be there when you see it and there on the sand was a heart rock for me. It was the perfect way to spend the day and know that Danielle was with me in spirit. I hope everyone had a wonderful day. 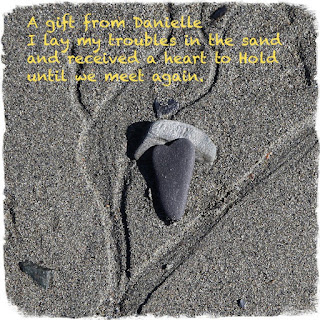 Posted by WoolenSails at 8:48 PM

The heart rock is so awesome. Glad you found it. What a pretty place to walk/hike. Glad you enjoyed your Mother's Day.

That rock is perfect. You were meant to find it

How sweet to find the rock from Danielle for Mother's Day.
Hugs :)
Lauren

Such a pretty peaceful area, you were meant to find that rock
Cathy

The heart stone was perfect. That second photo WAS awe inspiring and inspirational. Do you guys plan to do some camping again this year?

Great walk and wonderful to have the heart rock at the end...
Hugz

When I saw the picture of the sun coming through the clouds, I thought it must be Danielle watching. She must have guided you to the rock! I love it!

What a touching find for Mothers Day! Perfect!