It looks like we are in for a big storm, which has started tonight. The snow is falling and the wind is picking up. We are all ready, plenty of food and gas for the generator. Good day to enjoy more sewing time.

I finished my second stitchery from Kathy Schmitz. This one I did with multiple colors and it is also a hot pad. I like the snowflake border, but realized after I looked at the photo, I should have used one of the Christmas florals to match the greenery. Kathy mentioned doing more cup stitcheries, which would be fun for more hot pads, as gifts. 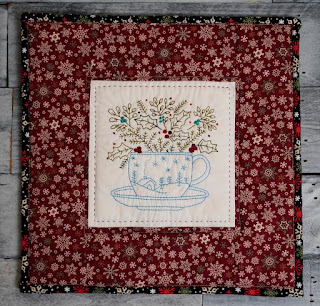 Another piece I made was, a needle felted penguin. I saw a few online and then watched a video. I ended up making it more my own.  I was thinking of making some for the boys so I may do an owl next. Good practice to get more used to felting, before I tackle the harder projects. 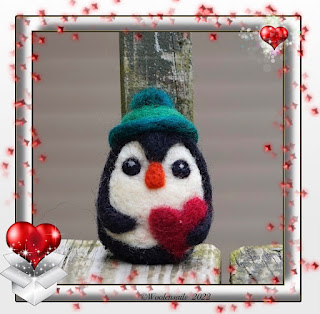 On Saturday we took a ride down the back roads, towards the ocean. We made a stop at the old mill, which seems to be falling apart, even more. The area is beautiful though and the fishing spot had lots of birds in the bushes, but none that would sit still or come out for a photo. 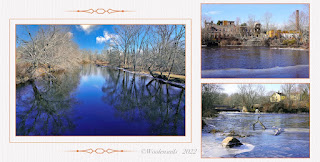 We ended up following the coastal road and stopping at the beach. We didn't last long, it was windy and cold, so no beach walks. We spotted these Snow Buntings, hanging out on the roof, a first for me. 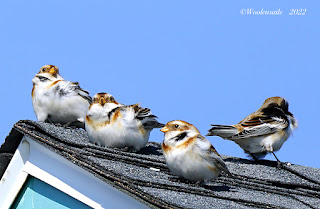 On Sunday we took a drive around a loop, where I usually spot hawks.  I saw four but they were too far and when I finally spot one close by, he took off and landed in a tree further away. To make it worse, he turned his back on me. Then we stopped to see the eagles. They were sitting in their nest area, so I couldn't get a good shot. It was nice to get out though and see them. When I got home, my resident Cardinal was waiting for me to fill the feeder.

I hope everyone is in good health and stays safe during the storm. 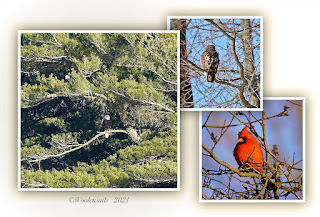 I hope that big storm will not cause too much inconvenience. Glad you could get out, even if the birds weren't cooperating. The Snow Buntings are darling. I love that felted piece. That does not look like something easy to me. One of my quilt group members has a small cafe, and she made a wall hanging of teacups.

I hope the storm passed you by...or did not wreak too much havoc.
Love, love, love your little penguin!

Keep safe - hope the storm is not too bad. love your little penguin and the stitchery...
Hugz

That stitchery is sweet...I like the cranberry/red of the border - it brings out the berries in the foliage in the cup. And your penguin is adorable! 😍 I don't even know if I could felt anymore. LOL about the birds...that hawk has quite the attitude. Too funny he turned his back on you. Perhaps the buntings were the harbingers of the winter snow. I hope you're safe and warm. ~Robin~

Love the embroidered teacup and flowers! Keep warm and busy.