I hope everyone had a wonderful weekend, no matter what holiday you celebrate. We had a nice weekend planned, but I seem to have gotten sick and it seemed to happen after I ate dinner on Saturday, so I suspect the food.

Not matter, I wasn't going to let the fact that I felt miserable, ruin the time with the kids. I had the house clean and dinner prepared, so that left the day to relax and it was just warm enough for a little walk on the beach. It really helped to get out in the fresh air and and I found a few heart rocks and some more sea glass.

Of course Bean was thrilled when he realized we had headed to the beach. He has no sense, he just went into the water, even though it is freezing. We all had fun exploring the beach. 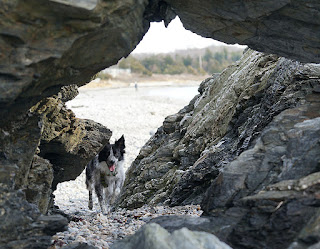 Sunday we had the kids at our house. We went to the early mass, since none of us wanted to stay up till midnight. Then a nice dinner and we opened presents. Nick was thrilled with his new harmonica, I think that is the only thing he cared about, lol. 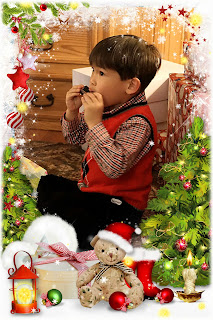 Alex was having fun playing with his new electronic phone and learning toy. 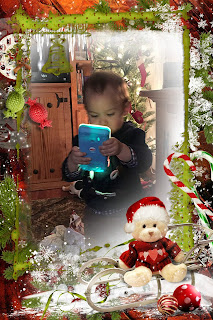 Bean was allowed to open one present, but he was more interested in playing with the kids. On Christmas he was more into presents and loves his new ball. 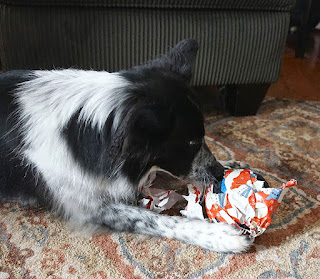 We planned on spending a little time at the kids. I was feeling wretched and tired and learned that they only made a few dishes I could eat and no meat that I could eat. We went and played with the kids and ended up staying and I just ate some potatoes, but I enjoyed being with the family and kids. 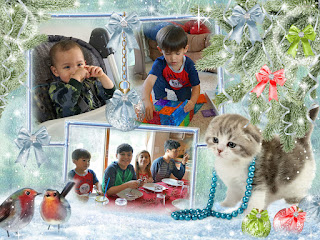 Merry Christmas from our family to yours! 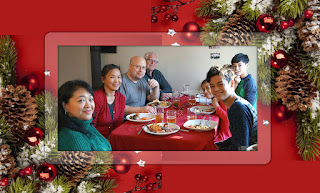 Too bad to be feeling lousy when the family is gathering. We had a very busy weekend and Christmas day began with 4:am rice delivery to the homeless and ran on and on until I delivered the last visitor, my SIL, to her train station by car. My granddaughter was not feeling well so they are still staying here. I am waiting for the house to return to a bit of normal. ( and Nikko grabbed a chunk of the turkey while I was out taking guests back home) .

It is to bad you felt awful. But I am sure being with the kids made it worth while.
Merry Christmas
Cathy

It's unfortunate that you were feeling ill for Christmas and hopefully you're on the mend. The photos are wonderful - celebrating Christmas with children is the very best.

One day last week I had a 24 hour bug of some sort and glad that it didn't linger longer. On a good day I choose to not eat certain things any longer. No longer eat red meat, pork/ham. I eat lots of vegetables, fish and chicken on occasion.

When invited to dinner at my son's house, if he has ham there are lots of other food to put on my plate. But at least it is time spent with family so don't miss the meat.

Hope you are on the mend!
You do such a great job with family pictures. Thanks for sharing.

Oh Debbie I hope you're feeling better now, no fun to be ill at Christmas - although it looks like you really made the best of it! The boys are too darling, what great pictures. Merry Christmas, hon!