I hope everyone had a good weekend, though it was over shadowed by the sad news on Sunday. My heart breaks for the families in Texas.

With so much sadness in the world lately, I do enjoy hiding my rocks and hoping it will bring a smile to the people who find them and a little happiness in other's lives. One thing that really made me feel good is that not only do we help others who find them, but also those who hide them.

Usually we take Nick on one day and he loves finding rocks and I have to tell him that he can only keep one and rehide the rest, which is hard for a four year old. This weekend we found a rock and he checked it out and then put it back in another place on the bridge. Then when we came home, I remembered I had found a heart shaped rock that had gold in it, and he loved it. Then he came over to me and said, I want you to have it, he is finding joy in giving to others now and that warms my heart.

Another story with rocks is that a neighbor loves to find rocks when she goes out and last week, she found one with an angel. She really didn't want the rock, but something made her take it and then she remembered me and bought it over. This rock is perfect for my room and she will sit there for awhile and someday, I plan on giving it to someone who needs it more than I. It says, "Your wings were ready, but my heart was not". Something simple as leaving painted rocks can touch so many others. If you are interested in joining in, you can go to my Facebook group, DSmiles4Miles. It is not just for rocks, but any type of gifts that you can leave in areas you visit, or gifts that you can give to others, to bring a smile to their day.

This is the rock she found, and this is my memorial table for my daughter. The angel is the one we had at her grave, until the stone came and the rocks are hearts and special items I find on the beach. 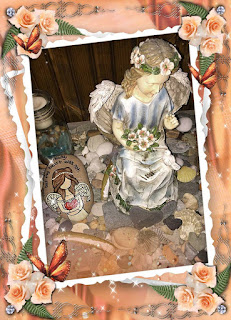 We took Nick out Saturday and I really wanted to go further up north but I needed to keep it to a few places with Nick along. We drove straight to the falls, no sight seeing or stops, so we could have more time enjoying the area. The falls were running full force, I tell Nick to smile and I get the grimace, that and I think he was a bit nervous being so close to the falls, lol. 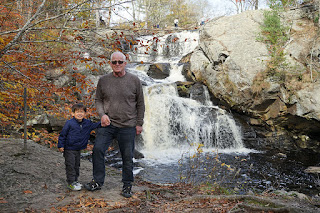 From there we walked along the path and through the covered bridge. 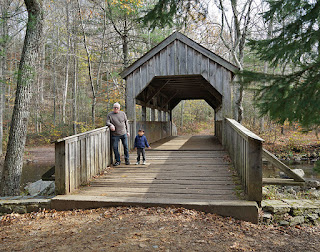 Then along the river path and through the woods, a great place for a little boy to play and explore. 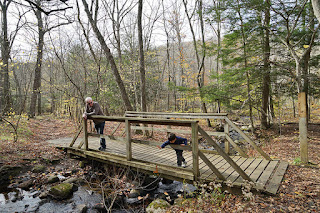 From there we went across to East Haddam, I wanted to see the oldest Bell and the Nathan Hale Schoolhouse. The school house was placed on the hill, over looking the Connecticut river, so it is more of a park like setting and another place, Nick could run around. 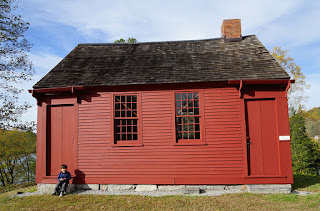 He went and set in the car with Bill while I took photos of the church and graveyard. It was hard to get a clear shot of the bell, but it was originally made for a Spanish Monestary in 815AD. A sea captain found the bell and used it as ballast for his ship and eventually it made it's way to East Haddam. 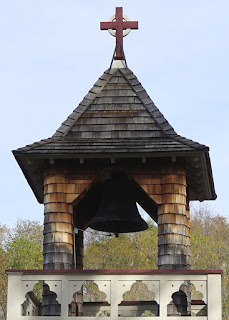 Then it was off to the castle. At this point, Nick was getting tired, so we took a quick tour around the castle and then a short hike into the woods. I really wanted him to go in the tunnel, which is part of the old mini railroad trail. The original owner of the castle, built a track around his property and had a small engine and cars to take his guests for rides.

Nick was nervous and couldn't wait to get out, then he said, lets go again. 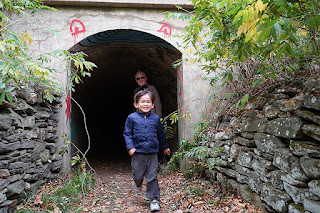 We had a nice walk around the path, back to the car and by the time we got back, his energy dwindled. I decided he needed something to eat and we got him a meal in the next town, but by the time the food came out, he was fast asleep. So he got a good nap on the way home and was full of energy again when his parents came over and we had dinner together. 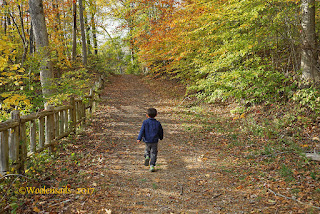 Sunday was another cloudy day but the rain held off and we were able to take a drive to the ocean. I was dragging, so a relaxing few hours on the beach was just what I needed. I found a few heart rocks and sea glass to add to my collection. Today I crashed, mostly resting and hoping I get my energy back tomorrow for all the ideas that are running through my head;) 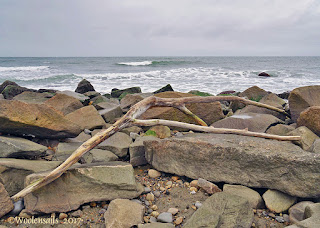 Posted by WoolenSails at 8:43 PM

So many sweet pictures of Nick. He looks so happy emerging from the tunnel!

I love the story of Nick and the rock. I remember when Leia found the joy in sharing the cookies she had made.

what wonderful memories you are making for Nick. that rock was meant for you.
Cathy

what fabulous fun... I can see why Nick is enjoying his time with you so much...

He looks so happy emerging from the tunnel!

The memories you are making with Nick will last him a lifetime. What a joy he is! And teaching him to give is precious. I love the angel rock your friend found, it looks wonderful on your table.