We have another nice weekend coming up, maybe some rain on Sunday but I know we will be exploring on Saturday. So.. I had to make some more rocks. I was only able to get six done, it does take me time with my bad arm and messed up brain, but I think that they should bring some smiles to the people who find them.

One of the things that takes me the longest is putting on the base coats, I like to add at least three so they don't wear down and I also put three coats of finish to seal them. Then I make lots of mistakes so I try and fix those before I seal them, but even if I am not the best artist, and get lazy, they are fun to do and fun to hide, at the different places we go.

The angels are a free pattern from Artist's Club. They offer some nice designs for free and I think I may do some on wood so I can do a better job on the designs. The rocks were chunky so I had to free hand it, on wood I can trace it on. 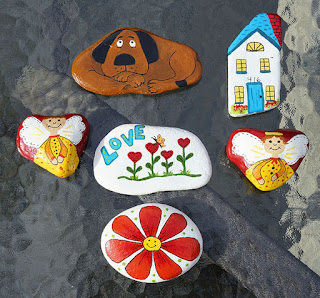 I also made a new stitchery from Kathy's One Stitch Club. I made this one as a gift, it will be a little pillow and I will put some lavender in it. My DIL has a friend who lost her husband this year and she and the kids will be spending the holidays with all of us, so I thought it would be nice to make a little something for her. I will finish later, since I need to get a nice cording to finish the edge and I don't want to add the lavender too early, so it smells fresh when I give it to her. I think adding her initials would be a nice touch, too. 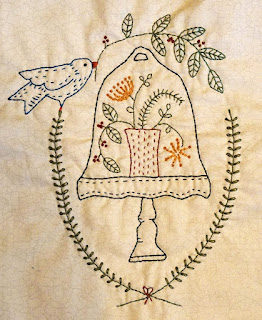 Posted by WoolenSails at 3:09 PM

Your rocks are too dang cute!!!
Happy exploring.

Love those rocks, Debbie, and your stitched lavender pillow is a lovely and thoughtful gift for your DIL's friend. Enjoy the weekend - we have a snow advisory so it might be interesting. It's still on the mild side so the snow will be wet if it shows up.

your rocks are great - some people are going to be very happy to find them. Lovely stitchery too...
Hugz

Wonderful rocks! I am so sorry to hear of a young woman who lost her husband and how nice to make her feel included
Cathy

What a sweet little pillow!

I just love your rocks. What kind of paint do you use? Do you paint on gesso first? I have a little lavender stuffed pillow that I keep on my bed beside my pillow.It is more than a year old but still has that wonderful relaxing scent.

great rocks...someone is going to get a huge smile upon finding them...how lovely to include Ivy's friend and family for the holidays...the pillow is a dear piece and so thoughtful...hugs

Your warm heart shines through in this post. What a great idea to paint pretty rocks to brighten a strangers day! And the stitchery too is so pretty.

Cute pillow! I love rocks/stones. When I find one that speaks to me, I take it home to this jar I have. Some are painted from when my little Pumpkin painted rocks! It's a pleasant jar to look at with so many memories. Thanks for sharing.

I am so impressed with your rocks, they're just gorgeous!!! Love the stitching too!