This and That Monday!


No sewing this weekend, mostly getting things done around the house and some shopping before Bill left for the week. I always like to make sure that I have everything that I need so I don't have to worry about going out, if I am down and since I am still resting my back, I have no desire to go out to shop.

My son came over for a Sunday cookout and I was able to download his photos from his phone. Most were ones I didn't want, but I got some nice shots of Nick and Alex, as well as some videos. I have been putting some videos that I take and a few from my son, on my YouTube Channel.

One of the things that happened while my son was there, was the baptism of Nick and Alex. We baptize children as a baby but she wanted to have it with her family, enough said;) 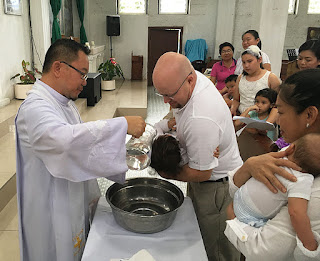 My son got a hotel to stay in while they were in the city, so they spent a week exploring the city. This is a great way to see the city and the mountains in the distance. 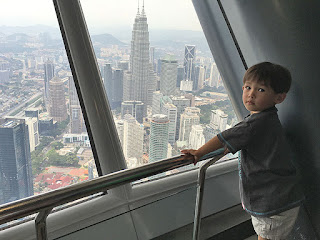 They also went to the zoo. Nick is with his cousins, Ivy's sister's kids. I met them while they were here, her sister and I got along wonderfully and her girls are adorable. 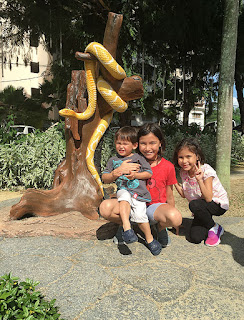 And here is a close up of Alex, he does look a bit like Billy in some ways. She is not coming home till the middle of September, so a long wait for grandma. 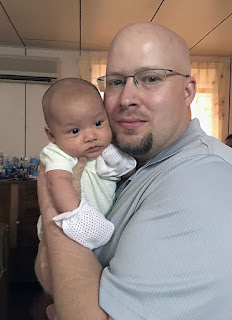 I haven't been able to work in the garden, just watering since this heat is not helping the new plants. Today it was full of birds, squirrels, a chipmunk and now a baby bunny. I notice a next in the back that had been ravaged, I think this one got away and now he is hiding in the thickets behind the trailer. He was not afraid of me, but then Bean wanted to see what I was doing and scared him away.

Today I got cleaning and laundry done, so hopefully I can get caught up on my BOM's and maybe a new project or two, this week. I hope everyone had a wonderful weekend. 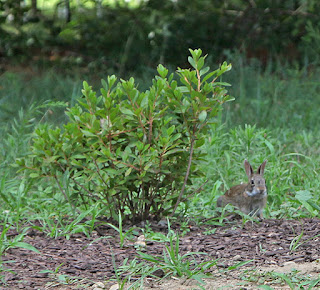 Posted by WoolenSails at 9:33 PM

So glad your son got to see the kids and spend some time with his wife.
I haven't seen a wild bunny in years and really don't want to see one here the deer have already found my garden.
hope you feel better soon.
Cathy

love love love the kiddo photos!!! They warm a grammies heart! hope your back behaves itself!

Nick looks like he is getting taller! Cute photo of him in the window and with his cousins.

Lovely photo of daddy and babe..

Great shot of the bunny, maybe he'll inspire a wuilt or stitchery!

Hang in there, 6 weeks and they'll be home!

Nice pictures, Deb...your little grandchildren are just beautiful! It's waaayy to hot to go out and work in the yard...my patio has its own form of a jungle growing...you know, the plants that decide to grow between the patio blocks..it's awful, but i'm waiting for a cooler day to get out and weed! Hope you feel better soon!!

the picture of Nick in the hotel window is darling...makes me want to pick him up and hug him...so I can only imagine how you feel! lovely to see Bill with the baby...seems like Ivy and Nick been gone forever...hugs my friend...almost done hooking the heart runner...

some lovely pictures of the family... it sounds like you are having soem very hot weather...
Hugz

Aw. I was hoping the grands would be home sooner.
Feel better.