Guess who's coming to dinner?

Today I watched for Moki and no sign of him.
Then I saw him in the back and called, and he kept going, he looked like he was chasing something.
An hour later, I look out and there he is, looking around for me.
I got some food and tried to entice him in, but he wasn't having any of it.
I finally got him close to the cellar door and picked him up and bought him in.
At first he was crying and the girls were hissing and growling at him, so I bought him into my office.

He was a bit unsure and kept going to the window and looking out.
Then he calmed down and decided food was better, so he had a good meal. 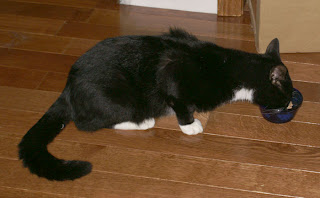 After crying and looking out the window, I got him to go on my chaise and sit with me. Once he was there, he decided to stay.
He wasn't too sure about this, but he gave it a try. 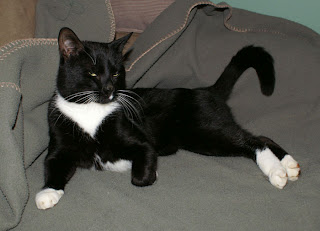 Then he realized how comfy, warm and safe it was and fell asleep. He has been sleeping most of the night.
He is a thin guy, but has a big head. I think with a few weeks of good food and rest, he might hit the 20 lb mark. 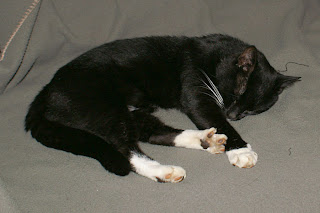 When I come into the room he wakes up and proceeds to clean himself. For a male, he really keeps himself clean. You can see how big his paws are, he was meant to be a big guy. Check those paws out, very neat feet. So, for tonight, Moki has a nice warm place that he can sleep in without worrying about coyotes. Tomorrow I will check with some neighbors to make sure he isn't theirs and then call the shelters. I know how much I miss my Black, and if he does belong to someone, I would love to reunite them. 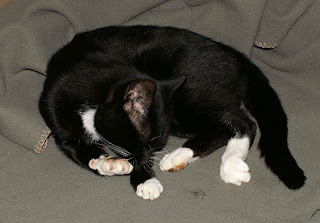 He is beautiful though

Whar a handsome fella...so glad he has a safe and cosy spot tonight...

I think 'the girls' are going to have a 'man' around the house!! Moki looks like a lovely cat. We acquire two cats this way...they showed up on our doorsteps. They knew a good thing and stayed for 12 and 14 years!! They were the perfect house guests!!
Take care!
Paulette

You are as special as he is. Thank you for giving him a chance to have a wonderful, loving home.

Oh, well, aren't you a sweetie? Invite a man to dinner, then kidnap him? LOL He does look relaxed and happy!

Hi Debbie,
I love him already, of course! Doesn't it do your heart good to love them? I hate thinking of all the kitties out there with all the dangers. Kitten is only 11 pounds, but a big girl. I am very happy for both of you!
Karmen

Welcome home Moki. I do believe you have been found by a really nice lady. May the 'girls' enjoy having a gorgeous tuxedo male in their household.

Pat.........also owned by cats and one is an adorable female tuxedo named Clancy

Ah, how nice he doesn't have to worry!! I bet he could get used to that.

Ah! A safe, warm comfortable home.
His paws are huge! Happy you were able to snatch him and get him in for the night. Getting darn cold now.

How wonderful for you to bring him in. I cannot imagine how safe and warm he must have felt sleeping inside. My Gomez "adopted me" much the same way. Fed him, brought him in, and he has been the best for 9 years now.

Debbie ~
I think MOKI got lucky when he wandered in your yard. How kind of you to try to find his owner (but what kind of owner would let him wander loose to fend for himself?). I hope you are his forever mom!
Hugs :)
Lauren

Oh, I'm so happy to hear that you caught Moki and brought him in! He's a beauty! If you can't find his owner, maybe he can stay with you :) He looks awfully good on that chaise!!... Donna

Debbie, you have a big heart. I'm glad you rescued the kitty, it's so hard to see them go hungry. We have rescued a few cats and dogs. It's always nice to find their owners or a no kill shelter.

I love your style, and to get a chance to play with some of those wools sounds like a lot of fun. I do wool applique, so this would be perfect for me!

oh he is a cutie..just be careful with him around your cats, using dishes and litterboxes until you are sure he doesnt have any illness...if he is an outdoor cat, he can certainly carry Bartonella at the very least...treatable, but you should know..a simple bloodtest will let you know..also a simple 15 minute SNAP test to let you know if he has FELV/FIV which is very contagious to your own kitties...i do animal rescue myself..and we keep one area for the strays until they are tested, treated, and re-homed. good luck!..love your blog

Hoping Moki realizes what the warmth really feels like and doesn't want to leave....

What a beautiful cat and so glad you have taken him in. I would take him in a minute!! (Safe to say since I live so far from you). He really is an exceptionally beautiful cat, but then, aren't they all?

So glad that Moki has a home now..He is meant to be with you!
Micki

He is beautiful. I hope you do find out if someone is looking for him. IF not I'm sure he will give you a lot of love