Cats on the Prowl

This week I am making the mad dash to finish up one last present to be mailed and a couple for my kids. I am making a wonky quilt for my daughter and a punched piece for my DIL. I will share photos when I finish.

Today the cats were in their bug mom mode. First Dora decided that 6 am was late enough to sleep in and proceeded to irritate me for an hour until she got bored. Of course I had no intention of getting up, so I ended up over sleeping. Then the two of them spent most of the day tearing through the house, knocking over whatever was in the way. They do not just run, the leap, slide and fly around, so it can be quite a circus at times. I think I should have asked Santa for a video camera, no way will I ever get a shot of them at that speed;)

Dora loves to help with laundry and she was in her stealth mode, hiding in the mesh basket. She makes the cutest face when she is in attack mode, but she always closes her eyes when I take a shot. I thought it was the flash, but realized that Izzy didn't shut her eyes, so it is Dora. She is just being a smart alec and closing them on purpose, haha.

(Dora had too much eggnog;) 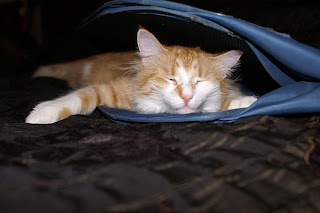 This is what we usually call Psycho kitty. She is my son's cat and whenever she comes over she goes into a hissy fit and scares the heck out of anyone who goes near her. He moved and they cannot keep her, so I seem to have gotten stuck with her. She is finally coming upstairs more, and stopped hissing at me. She loves Dora and playing, and dora loves having someone new to harass. I asked my husband to give her a name and he said Isabelle, so she is now Izzy. 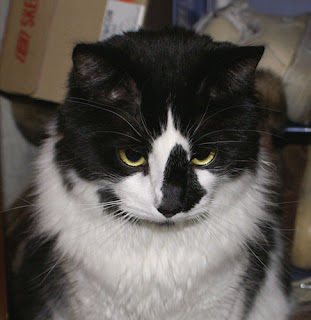 Very cute Debbie! The pic of Dora is sooo funny! She really does look like she kinda passed out from too much partying! LOL! Glad that Izzy is acclimating to her new home... silly cats! :-)

Debbie those pictures are way too funny - Dora is such a character -that picture had me laughing out loud.

Debbie, Love your kitty pics and your blog. Thanks for stopping by my blog.