Monday this and that!


This weekend we didn't do too much outdoors, though we did get some time at the beach with Bean. I spent the time walking in the water and playing with Bean, but no photos. We did go to the lighthouse and as we walked around, I found my first rock. It was done by another group, so I took a photo with my phone. I put it back so someone else can find it. 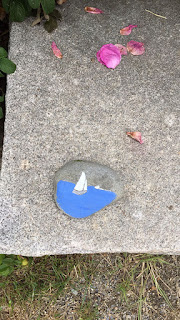 One thing we did do, is go shopping. Bean needed a new leash so we went for that and I found one roll of netting, so I grabbed it.

What did I do with it? I made a curtain for the little window in my beach room. I had a pair of cast iron, blue anchors and I put those at the top of the window and dropped the netting over that. I haven't gotten a chance to get new lights so I threw up my starfish to see how they looked. I might try and find something large, since the netting is heavy and bulky, would be fun to find beach items on one string, or things that get caught in a net.

Not a great photo, just used my phone and I will rearrange the area as I go. The room was dark when I took it, so the lights look funny and a little figure at the end. 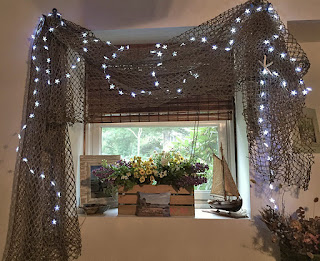 On Sunday we worked around the house. I also got my oar on the wall, I had to place it above my painting area, since it didn't fit in the other space with the longer mermaid hooks. My son and Nick came over for a visit, he had to return some tools and decided he would eat dinner with us, he loves shish kabobs.

He and Nick went in the jacuzzi, Nick loves to swim in that, but when my son went to cool off in the pool, Nick decided he wanted to try it, after all. My son was blowing up the raft and Nick decided he didn't like the deep water, but after awhile he got used to it and was having fun. 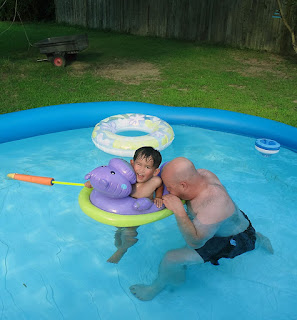 And of course, Bean was thrilled to have his buddy to play with, especially when they splashed water out of the pool. I wonder if Bean will ever slow down, wish I had half of his energy, lol.

I hope you all had a nice weekend. Today I started on the rocks I found, this time I am just going freehand, I make so many messes, having lines doesn't help. Next I need to work on some pillows and the blue jean quilt for my beach room. 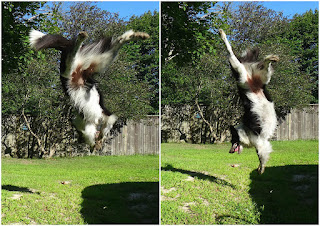 Posted by WoolenSails at 8:11 PM

that bean is amazing. I love the netting.
Cathy

Oh my goodness. The netting curtain is so creative. Just perfect!

I think Bean needs. Job with Super Dogs in the summer to expend all that energy! Looks look
Ike a great pool cooling off day!

Great little sailboat rock, it would have fit in nicely with your netting curtain!

What great pictures of Bean!

I love that idea with the netting... very creative...

I never would have thought of the netting for a curtain! I love that idea! :0)